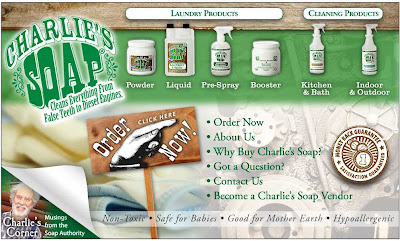 How we got from there to here...
In 1976, Charlie Sutherland, Jr. and his brother-in-law Ron Joyce were working for the yarn oil division (run by Charlie's dad) of a large textile yarn company.
The yarn company asked Charlie to find a soap to clean up the oils his division was making along with other accumulated grime the yarn machines picked up.
Rather than buy a soap, Ron and Charlie started making it themselves on the sly in an old barn on Ron's dad's farm. Charlie came up with the final formula after a short while; the stuff worked great, and they were in business.
With $200, Charlie and Ron officially started their little soap company. Charlie had to borrow $100 from Ron to cover his half of the enterprise. Eventually the yarn company figured out where the soap was coming from and raised Hell.
After they convinced Ron that they would continue buying the soap, he went with the new soap company. The yarn company kept Charlie. Charlie's dad used to say of the original cleaner, "It cleans everything from false teeth to diesel engines." We put that on the labels.
The soap company struggled on with Charlie still helping make soap on weekends, and Ron delivering during the week. The oil division at the textile yarn company was bought out in 1981 by a German chemical company and Charlie went with the Germans.
Time to start a new company
In 1983, over strong objections from his wife Jane, Charlie left his good job and bought Ron's shares of the struggling little soap company.
Ron left for greener pastures, and Charlie, now over $60,000 in debt, moved all the equipment to the old yarn oil division where his father, Charlie senior, and Ron's secretary, Jenny Craver, still kept an office. Jenny stayed with the little soap company.
The very day Charlie took over the soap company, the old yarn company started modernizing and shipping thousands of their old machines to China.
The Chinese folks insisted that these old grimy machines had to be sparkling clean before shipping. Soap sales soared, and Charlie hired Wayne Belton to mix soap and drive the truck he got from the German company.
Charlie paid off his debts and was sitting pretty especially after he invented a new scour (Laundry Liquid) for the Quality Control Labs, and it was now selling to the outdoor-wear folks. All was good - for a while.
Tough times
In 1992, after all of the old textile machines had been shipped to China, the yarn company was sold and 75% of Charlie's soap business was gone overnight.
Times were tough, and Charlie and Jane had two kids in college and two more in private school. Thank Goodness Charlie had the new sales in the Laundry Liquid for outdoor wear. That kept the doors open. Sadly, Charlie's dad passed on in 1994. He is missed.
Today -- Sold around the globe
Over the years, through word-of-mouth and lots of scratching, the original Charlie's Soap, the new Laundry Liquid, and the newer Laundry Powder have found their way around the globe and they continue to amaze those who try them. The boys, Taylor, James, and Morgan started working at the plant in 2002 and they are really making the company grow.
OUR REVIEW.
I HAVE USED SEVERAL OF CHARLIES SOAP'S PRODUCTS ALL WORK GREAT. I LOVE THERE LAUNDRY SOAP AND LAUNDRY PRE SPRAY TOO. BOTH ARE AMAZING PRODUCTS. I USED THESE PRODUCTS ON MY CLOTH DIAPERS. I ALSO USED THE SPRAY ON MY HUSBANDS AND GIRLS SHIRTS THAT HAD SOME PRETTY BAD STAINS. WELL NEEDLESS TO SAY THERE ARENT ANY STAINS ANYMORE. YOU CAN FIND THESE GREAT PRODUCTS AT CHARLIES SOAPS ONLINE.
BE SURE TO ENTER INTO THE RAFFLE COPTER BELOW FOR YOUR CHANCE TO WIN SOME AMAZING PRODUCTS FROM CHARLIES. 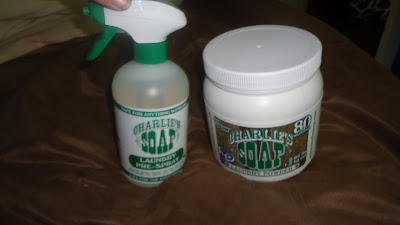 ONE LUCKY WINNER WILL WIN THESE ITEMS.
a Rafflecopter giveaway
DISCLAIMER:I DID RECIEVE SAMPLE PRODUCTS TO TRY. I WASNT CONPENSATED IN ANY OTHER WAY FOR THSI REVIEW. THESE ARE ALL MY OWN OPINIONS.
Posted by Unknown at 9:26 PM

I want some of their soap! Can never have too much laundry detergent having a family of 5 (almost 6!!)

I like about Charlie's soap that it isn't toxic like some of the other detergents out there seem to be.
Another product I'd like to try is their general household cleaner.

I'd love that it is all natural and that I can safely use this on my cloth diapers.