It all started with two slightly used sewing machines and a man with a whole lot of ambition.
The year was 1939, and a young, soon-to-be-entrepreneur named Frank Farino had just found out that the Cleveland bra company that he worked for was closing its doors. Little did he know at the time that this temporary setback was actually a blessing in disguise. "When one door closes, another one opens," as the saying goes.
A second bit of divine providence came in the form of the "severance package" that Frank received from his former employers. In lieu of the vacation pay he was owed, instead, Frank was given two well-used, but entirely serviceable, sewing machines, along with four sales accounts and the tidy sum of $240.
So, suddenly out of a job but equipped with two sewing machines, some business contacts, and a bit of cash, Frank decided that the best way to re-join the ranks of the gainfully employed was to do what he knew best: make bras and sell bras.
The challenges, and subsequent triumphs, didn't end there. It was the early 40's, after all, and the war was on. Rationing was in full effect in the U.S., as the country conserved virtually everything in order to support the war effort. This led to a shortage of the raw materials used to manufacture intimate apparel. So, how would Frank keep his fledgling company afloat without product to sell?
He quickly realized that maternity and nursing bras were not classified as intimate apparel. They were, in fact, medical items and were considered to be just as necessary as crutches and bandages.

Today, Leading Lady is one of the country's oldest and most successful intimate apparel manufacturers. We specialize in quality lingerie for mothers-to-be and new moms, as well as full-figure bras, sleep/leisure bras and other specialty lingerie and accessories.

It's been nearly three-quarters of a century, but Frank Farino's original vision is still alive and well here at Leading Lady. We remain a family company with Frank's descendants still at the helm. And we're still in the business of making and selling maternity and nursing bras, just like Frank was all those years ago. 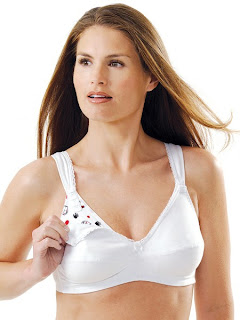 
MY REVIEW.
I REALLY NEEDED A NEW NURSING BRA.I COULDNT SEEM TO FIND MINE ANYWHERE AT ALL.I PACKED IT AWAY WHEN I WAS THRU NURSING MEME.I WAS SUPER HAPPY I WAS ABLE TO REVIEW THE BABY SEES IT NURSING BRA. THIS BRA IS SO COMFORTABLE.I REALLY LIKE IT ALOT. I WILL DEFFINTALY KEEP USING THIS BRA. I LOVE THAT LEADING LADY HAS SO MANY OPTIONS FOR NURSING BRA'S.THEY HAVE SO MUCH MORE STUFF TOO.HEAD OVER TO LEADING LADY AND CHECK EM OUT.BE SURE TO ENTER INTO THE RAFFLECOPTOR BELOW FOR YOUR CHANCE TO WIN A FREE ITEM FROM LEADING LADY.Follow Leading Lady on Facebook,Twitter and Google+.

DISCLAIMER:I WASNT CONPENSATED IN ANY OTHER WAY FOR THIS REVIEW.HOWEVER I DID RECIEVE A SAMPLE TO TRY OUT. THESE ARE ALL MY OWN OPINIONS.
Posted by Unknown at 8:46 PM

Becoming The Me I Want to Be said...

I love the nursing tanks. I have a baby due in two months and i don't have anything for nursing!
nikki bergin

I would pick the "Molded Padded Seamless Underwire Full Figure Bra (5028)" because I need a NEW bra really bad!
kimbuckjr

I would get the Molded Padded Seamless Underwire Full Figure Bra (5028) because it looks like it would work great with t shirts.

Molded Seamless Wirefree Nursing Bra because I am nursing.

I would get the Organic Molded Underwire Nursing Bra (470X) because I don't have any nursing bras and this one looks great!

I would get the Sport Wirefree Nursing Bra! I just had baby #2 and have been looking for a new nursing bra that is comfortable with good coverage. This one looks great! Thanks!
octoberthings at gmail dot com

I would get the nursing cami, because I feel I would wear that more and get more use out of it.

I would get the Lace cup Wirefree Nursing Bra because I would love to have a pretty nursing bra..all of mine are ugly! Ha :)