Tom Arma’s Please Save the Animals™ series of photographs is dedicated to all the little ones everywhere. May they make the world a better place.
The art of photography is truly one of the most compelling forms of imagery. Not only does it reflect our personality and creativity, it can also help us to explore our humanity. My work has touched millions of people all over the world. I hope that through these photographs, in word’s attributed to Chief Seattle, we come to this reality:
“We are all part of the web of life, and whatever we do to the web we do to ourselves”. TA

Three of baby photographer Tom Arma's "Please Save the Animals" baby posters . Walrus, turtle, and owl from his ground breaking photo series.
Tom Arma, “the most published baby photographer in the world” began his photographic career as a teenager when he was hired by the largest circulation newspaper of its time, the New York Daily News, as their youngest staff photographer. At the Daily News, he covered many diverse assignments including political conventions, the Woodstock Music Festival, The Beatles invasion, President Nixon‘s rise and fall, as well as every facet of big city life: the fires, the murders, the poor, the privileged, the famous and the infamo
After several years of covering “hard” news, and hundreds of journalism awards later, he asked for reassignment to the Magazine section of the paper. It is there where, in color, he photographed the most famous stars of the time from his home base-The Beverly Hills Hotel. Mega-stars such as Clint Eastwood, Paul Newman, Jack Nicholson, and Michael Caine, to name a few were the subjects of his covers.After years of daily deadlines, Tom decided to leave the world of journalism to open his own studio, concentrating on magazine and advertising work. He shot successful campaigns for Fortune 500 companies, as well as covers for Time, People, Money, French Photo, and Ladies Home Journal.

A number of Tom Arma's baby books. He has published 47 books world wide.
In 1972 he began his work with babies. Tom was hooked, all the freshness he felt as a teenager shooting his first images came into play, as he saw he could capture the totally uninhibited beauty of a child. From that first assignment numerous others followed, and now, as the New York Timesreported he is “the most published baby photographer in the world.”

Tom Arma's famous lion photo from his wildly popular mamiferos series in Brazil. The most popular advertising campaign in the last quarter of a century in South America.


Many successful advertising campaigns, based on Tom’s costumed cuties have owed their successes to his innovative creations and photography. Tom Arma’s “Mamiferos“, his advertising campaign forParmalat, has created a sensation in Brazil and Latin America. Running since 1995, this campaign has captured the hearts of millions. It was the most popular campaign of the past decade in Brazil.

In the 1980′s his work with costumed children graced the covers of magazines, including consecutive Christmas covers for Ladies Home Journal. To express his ecological concerns, Tom created his Please Save the Animals series of posters and greeting cards. This series of babies dressed in animal outfits designed by Tom was a huge success worldwide.

Tom Arma calendars from his "Please Save the Animals" and "Year of the Baby" series.


His best selling books published by Grosset & Dunlap, Animal Time!and Dress-Up Time!, as well as his top selling“Please Save the Animals”calendars published byLandmark/At-a-glance/Mead, marked the beginning of America’s craze for costumed babies and a trend that many would follow. Tom has now authored 47original books worldwide. His costumed series is hailed as a breakthrough in the children’s publishing market. Through his success, Tom gives back to many charities, and is proud to support the efforts of the National Wildlife Federation.

Harry N. Abrams released Tom’s picture books to rave reviews. Publishers Weekly says of “We’re Going on Safari” “The pictures are delicious with the 3 dimensional feel and color saturation of old View-master vignettes. Toddler fan audiences, typically enthralled with photos of their peers, may just go ape for them.”
OUR REVIEW.
I WAS SO EXCITED TO HAVE THE CHANCE TO REVIEW A COSTUME FROM TOM ARMA. I HAVE BEEN LOOKING FOR A COSTUME FOR MY NEW SON TO WEAR FOR HALLOWEEN. I PICKED THE LION COSTUME. I LOVE HOW SOFT IT IS. I LOVE HOW DETAILED IT IS ALSO. I LIKE THAT IT COMES WITH REMOVABLE BOOTIES. I LIEK THAT THE HAT IS NOT ATTACHED AS WELL. I KNOW MY SON WILL LOOK SUPER CUTE IN THE TOM ARMA LION COSTUME. HEAD OVER AND CHECKOUT TOM ARMA COSTUMES HERE. YOU CAN PURCHASE ONE AT HALLOWEEN EXPRESS. 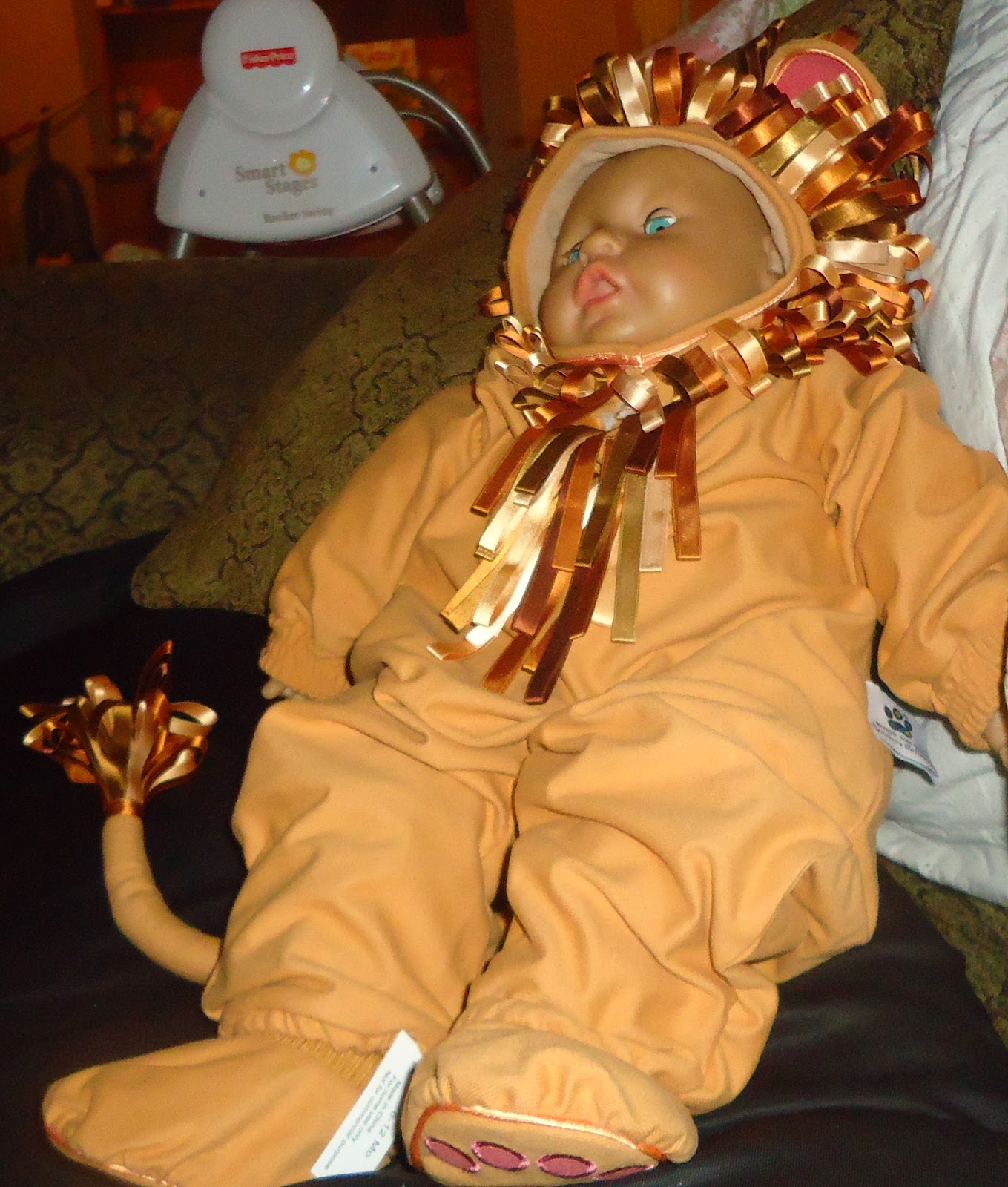 I LOVE THSI COSTUME. IT FIT PERFECT ON BREA'S BABY DOLL. THE BABY DOLL IS ABOUT TEH SIZE OF A 6 MONTH OLD BABY. SO I KNOW IT WILL FIT MY SON AROUND HALLOWEEN.

DISCLAIMER: I DID RECIEVE A SAMPLE PRODUCT TO TRY. I WASN COMPENSATED IN ANY OTHER WAY FOR THIS REVIEW. THESE ARE ALL MY OWN OPINIONS.
Posted by Unknown at 11:10 PM