A personalized picture from iCaughtSanta is the perfect gift for any child… PROOF that their favorite fictional character is not only real, but was actually ‘Caught on Camera’ in their very own home! Kids will be amazed when they see the "proof" and you'll be a Hero! Choose from our world famous cast of characters including Santa Claus, Rudolph, The Easter Bunny and The Tooth Fairy. This year we've added Black and Hispanic Santas too. 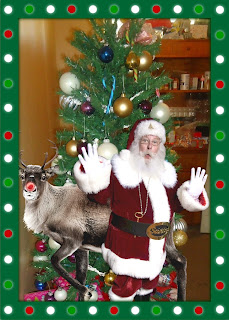 my review.
My daughter brea goes to school and this little girl in her class had been telling her to stop talking about santa because he isnt real he is  fake. brea had been coming home telling me that and i told her dont believe that girl. she was begining to believe her i think. i was so happy when i was able to review a picture from the icaughtsanta website. i then made my picture and downloaded it and then printed it out. i couldnt wait for brea to get home from school and show her it. well her dad got home before here and i showed him the picture. he said this looks so real. he then said he'd take care of it. so when brea came home he said i have to show you something. he showed her the picture shetook it and ran to where out tree is put up at and looked at it and then at the picture. then said who caught santa. my husband said he did. lol. then she came asked him if she could take it to school and show the class, exspecialy the girl that didnt believe santa was real. so i told my husband lets make all the kids a card with the picture on it. he said okay but how are the kids going to know its our tree forreal. so i said okay i'll take a picture of brea by our tree and make it the cover of the card then the santa pic on the inside. brea took the cards and handed them out today. she came home and said everyone was saying they knew santa was real. even the little girl that had been telling brea he wasnt real said she was going to show her parents that santa was real. how awesome is that right? head over and get your child a picture of santa in your house.

a Rafflecopter giveaway I received one or more of the products mentioned above for free using Tomoson.com. Regardless, I only recommend products or services I use personally and believe will be good for my readers.
Posted by Unknown at 1:08 AM