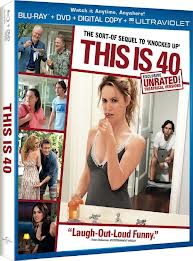 From The Director Of Knocked Up and The 40-Year-Old Virgin
Comes The Newest, Laugh-out-Loud Comedy
Starring Paul Rudd, Leslie Mann, Melissa McCarthy, Jason Segel, Megan Fox, Albert Brooks and John Lithgow
THIS IS 40
³High-spirited and hilarious² ­ Peter Travers, Rolling Stone
Coming to Blu-ray Combo Pack with Unrated Version, DVD, Digital Copy & UltraViolet , on March 22, 2013
A midlife milestone sends a long-married couple into an uproarious tailspin in This is 40, coming to Blu-ray Combo Pack, DVD and On Demand on March 22, 2013, from Universal Studios Home Entertainment. Audiences fell in love with contentiously loving couple Pete and Debbie in Judd Apatow¹s comedy sensation Knocked Up. Five years later Apatow reunites with his hilarious creations as Paul Rudd and Leslie Mann reprise their roles as husband and wife balancing the challenges and rewards of marriage and parenthood with the milestone of turning 40. The Blu-ray Combo Pack includes a hilarious unrated edition along with more than an hour of extended and additional scenes, backstage documentaries andcommentary by the cast and of the raucous and raunchy comedy that Entertainment Weekly¹s Owen Gleiberman says is ³laugh-out-loud funny.²
The Blu-ray Combo Pack allows consumers to view This Is 40 anytime, anywhere on the platform of their choice. It includes a Blu-ray disc, a DVD, a Digital Copy and UltraViolet for the ultimate, complete viewing experience.
· Blu-ray disc unleashes the power of your HDTV and is the best way to watch movies at home, featuring perfect hi-def picture and hi-def sound.
· DVD offers the flexibility and convenience of playing movies in more places, both at home and away.
· Digital Copy provides consumers with a choice of formats from a variety of partners, including options to watch on iPhone®, Android , computers and more.
· UltraViolet is a revolutionary new way for consumers to collect their movies and TV shows in the cloud. UltraViolet lets consumers instantly stream and download to tablets, smartphones, computers and TVs. Now available in both the United States and Canada.
Paul Rudd (I Love You Man, Role Models) and Leslie Mann (The Change-Up, Funny People) head up a stellar comedy cast that includes Melissa McCarthy (Bridesmaids), Jason Segel (Forgetting Sarah Marshall), Megan Fox (Transformers), John Lithgow (Rise of the Planet of the Ape, Terms of Endearment) and Albert Brooks (Broadcast News, Drive), with Chris O¹Dowd (Bridesmaids), Iris Apatow (Funny People), Maude Apatow (Knocked Up), Annie Mumolo, (Bridesmaids), Robert Smigel (You Don¹t Mess With the Zohan), Charlyne Yi (Knocked Up) and Lena Dunham (³Girls²).
Bonus Features Exclusive to the Blu-rayTM
· Unrated Edition
· The Making Of This Is 40
· This Is Albert Brooks (At Work)
· Graham Parker & The Rumour: Long Emotional Ride
· Brooks-O-Rama
· Biking With Barry
· Triumph The Insult Comic Dog
· Kids On The Loose 3
· Bodies By Jason Commercial
· Fresh Air With Terry Gross
· Deleted, Extended & Alternate Scenes
· Over A Half Hour of Music with Graham Parker and the Rumour, and Ryan Adams
Bonus Features on Both the Blu-rayTM and DVD
· Gag Reel
· Line-O-Rama
· More Deleted Scenes
· More Music from Graham Parker and the Rumour, and Ryan Adams
· Feature Commentary with Writer/Director Judd Apatow
SYNOPSIS
From the director of Knocked Up and The 40-Year-Old Virgin comes an unfiltered, comedic look inside the life of an American family. After years of marriage, Pete (Paul Rudd) and Debbie (Leslie Mann) are approaching a milestone meltdown. As they try to balance romance, careers, parents and children in their own hilarious ways, they must also figure out how to enjoy the rest of their lives. Featuring Melissa McCarthy, Jason Segel, Megan Fox, John Lithgow and Albert Brooks, This is 40 is a candid and heartwarming comedy about the challenges and rewards of marriage and parenthood in the modern age.

MAKE SURE TO CHECK OUT THE AWESOME TRAILER. I KNOW I REALLY WANT TO SEE THIS MOVIE.

DISCLAIMER: I WASNT COMPENSATED FOR THIS POST AT ALL.THESE ARE ALL MY OWN OPINIONS.
Posted by Unknown at 11:27 AM

Email ThisBlogThis!Share to TwitterShare to FacebookShare to Pinterest
Labels: THIS IS 40 DVD