1850: USA - Hiram Hutchinson, an American, meets Charles Goodyear who just invented the vulcanization process for rubber. Fascinated by this new discovery and the resulting material, Hutchinson buys the patent from Goodyear to manufacture footwear.
1853: France - Hutchinson establishes 'A l'Aigle' in France ('To the Eagle' to honor the bird that symbolizes America) and starts manufacturing rubber boots for farming activities.
In 1853, 95% of the French population is still working on fields with wooden clogs as it had been for generations. The new Aigle boots became an immediate success as for the first time farmers were able to come back from work with their feet dry and mud free.
Overtime, the company name will just become Aigle (pronounced 'Eh-gleu'), 'Eagle'.
Aigle's creation date '1853' is present as a logo on many boots.
1857: 4 years only after its creation, Aigle manufactures, by hand, 14 000 pairs of boots per day!
1903: Aigle's collection of rubber footwear and accessories now totals several hundred different items sold internationally.
1932: The company starts developing rubber and fabric footwear for leisure, and expands its clothing collection (addition of oilskins and reversible gabardines among others).
1953: Aigle employs 1850 people and manufactures 30,000 pairs of footwear per day.
1972: The range of watersports boots is launched to coincide with the Munich Olympic Games, in association with navigator Marc Pajot. The blue design with two horizontal white stripes has since become a classic.
1973: Launch of the Ecuyer horseback riding boot, utilizing an exclusive manufacturing process known as Slush Molding®.
1989: Launch of the first complete textile collection under the name 'Country' for hunting and other rural pursuits. Opening of the first Aigle owned shop in Paris on Boulevard Saint-Germain.
1991: Launch of the watersports textile collection.
1992: Aigle is a supplier to the America's Cup, allowing it to develop nautical products designed to excel in the most demanding and challenging situations.
1994: Aigle separates from the Hutchinson Group and is introduced to the French stock exchange.
1995: The company signs a licensing agreement with Japan for the expansion of Aigle shops on this territory.
1998: Aigle opens its first shop in Beijing.
2001: Introduction of the Actimum ranges, a technical label for high-performance Aigle products.
2003: Aigle celebrates its 150th birthday, signs a licensing agreement for the textile range in the US and becomes part of the Swiss conglomerate Maus Freres.
2004: Aigle grants CaliEagle exclusive rights for the distribution of rubber footwear in the USA.
Today: Aigle is recognized worldwide as the company offering the best quality and design for rubber footwear. 95% of Aigle's collection is still handcrafted in France, benefiting from the company's unsurpassed knowledge in the vulcanization process of natural rubber and its unconditional attention to detail.
Aigle is No. 1 worldwide for the manufacture of high quality hunting boots (Parcours model) and horseback riding boots (Ecuyer model) as well as a European leader for nautical boots (Glenan, Glenan ISO, Skey, Bora and Maramu models are topsellers).
OUR REVIEW.
WHEN THE PACKAGE GOT HERE AND I OPENED IT,ME'ANA WAS STANDING RIGHT BESIDE ME.SHE SEEN THE BOOTS AND WAS SAYING OH MOMMY THERE SO PRETTY. I GOT THESE BOOTS FOR ME'ANA SINCE BREA HAD JUST GOTTEN A NEW PAIR LAST MONTH.SINCE WE LIVE IN LOUISIANA I HAVE TO MAKE SURE MY GIRLS ALWAYS HAVE A PAIR OF RAINBOOTS THAT FIT THEM, BECAUSE IT RAINS ALOT HERE.IT IS HARD TO FIND RAINBOOTS THAT DONT LEAVE BLISTERS AND FIT MY GIRLS PERFECTLY AND COMFORTABLY.ME'ANA WILL USUALLY TRY TO TAKE HER SHOES OFF WITHIN 20 MINS OF ME PUTTING THEM ON HER. WELL LET ME TELL YOU SHE LEFT THE RED LOLLIPOP BOOTS ON.I ASKED HER IS THEY FELT GOOD ON HER FEET OR HURT THEM.SHE TOLD ME THAT HER FEET LIKED THESE BOOTS. THEY WERE SOFT AND FELT GOOD ON HER FEET AND DIDNT HURT THEM.I LOVE THE FACT THAT ME'ANA WANTS TO LEAVE THEM ON. I THINK THEY ARE SO CUTE.YES I WILL LET ME'ANA KEEP WEARING HER LOLLIPOP BOOTS. YOU CAN FIND SOME REALLY CUTE RAINBOOTS FOR YOUR WHOLE FAMILY RIGHT HERE. 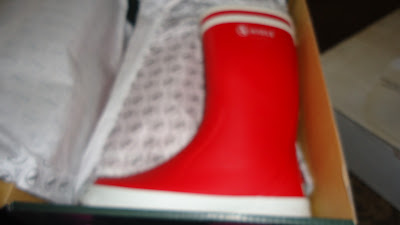 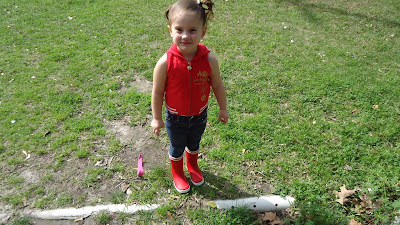 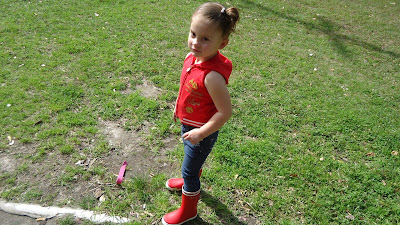 ANOTHER PIC OF MY ME'ANA.
DISCLAIMER:I WASNT CONPENSATED IN ANYWAY FOR THIS REVIEW. HOWEVER I DID RECIEVE A PAIR OF BOOTS FOR MY DAUGHTER TO FORM A HONEST OPINION.THESE ARE ALL MY OWN OPINIONS.