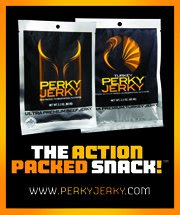 ABOUT PERKY JERKY
Our story -- like most good stories -- begins with two Jerks in a ski lodge. After a long, hard night of energy-drink-cocktail-fueled libation, these jerks settled in while the winter storm raged outside. The next morning they awoke, loaded up their gear, and headed out to the mountain. Amongst this gear was an open bag of peppered beef jerky, which had, unfortunately became drenched in some of the energy drink that had been carelessly spilled the night before. On the first lift up, it made no difference. To these jerks, jerky was the only breakfast they needed, altered or not. Much to their delight, the jerky had retained its original flavor, but was more tender by the accident. What's more, as they floated their way down the mountain through bottomless powder, they realized they'd been given an extra boost - the jerky had taken on some of the pep of the energy drink. On the next lift ride up, the greatest innovation in jerky since cracked pepper was born.

Since then, these Jerks developed a very sophisticated process for making Perky Jerky. The result? Just the best tasting, most tender jerky around. The bonus? Perky Jerky is now the ultimate snack to help get you up the mountain, down the slope, or off on whatever adventure you decide.
OUR REVIEW 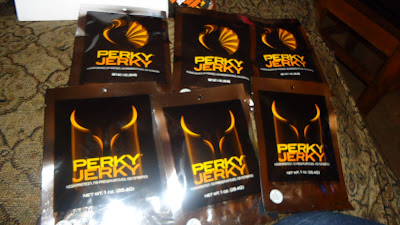 THIS IS WHAT WE RECIEVED TO TRY OUT.
MY HUSBAND LOVED JERKY.SO I LET HIM TRY IT FIRST.HIS COMMENTS ARE,THAT HE LIKES THIS JERKY.IT ISNT'S ALL TOUGH AND HARD.IT IS EASY TO CHEW.IT HAS A GOOD FLAVOR.OVERALL ITS A PRETTY GOOD JERKY.I MYSELF THINK IT TASTES LIKE TERAYAKI JERKY.IT IS A GOOD JERKY TO ME TOO. WE TRIED THERE BEEF AND THERE TURKEY JERKY TOO.THEY TATSE THE SAME TO ME AND MY HUSBAND. YOU CAN FIND THESE JERKY'S OVER AT PERKY JERKY. MY GIRLS ALSO LIKE THE JERKY TOO.


DISCLAIMER:I WAS GIVEN A SAMPLE OF THE JERKY TO FORM AN OPINION.THESE ARE ALL MY OWN OPINIONS.
Posted by Unknown at 6:46 AM