My name is Pamela and I invented Pambra’s, “The Original Bra Liner.” This is my story.

I was pretty much a stay-at-home mom taking care of three kids, running my home, and taking an occasional part-time job to supplement the family income. I had always heard how homemakers had far more skills then they gave their selves credit for, such as organizer, banker, seamstress, etc. Now to turn that in to a business was a whole different thing.
One night, I kissed my husband good night and, as I did, I said to him, “I wish I could find a way to make money and stay home.” This was my light bulb moment. Like a beacon in the night this idea pops into my head, it was 9:00 pm and I was so wired with these thoughts filling my head. I got up and sat writing notes as they filled my head until 4 am. It all just kept coming from out of nowhere.
In the morning, when I shared with my husband what happened, he says, without any enthusiasm, “Ya, Ya.” Oh ye of little faith, I thought. That day I went to the library and found books on what to do with an invention. The same day this company shows up on TV, you know one of those companies that will develop your invention for you? So the following day, I went in to talk to them and signed papers.


Where we are today

With all of the above said, I could never put Pambra’s out to the public without you knowing how it came about. Ladies grab your dream, a vision or whatever you want to call it and run with it. Never let anyone tell you that you cannot live a dream. Seek out your dreams. Life is too short to not let yourself soar to your full potential. Perhaps you will have your greatest riches as well. I have been in magazines and newspapers all over the United States. I was voted as one of twenty-four “Up and Coming Young Business Leader” within our community. I received ownership of the Pambra’s name with the United States Patent office, three months after my Angel left. I will forever miss his words, “I don’t ever want you to worry about anything” and his constant encouragement “you’re doing everything just right.”
*I have purposely left my Angels name out of the above testimony, I know now that it was not his name or mine that is important. What was important is the purpose that Pambra’s had in his life, mine, and now yours!
Currently we have imposters, I’d like to think that they would have never come about. However, I’ve learned, since starting this business that you know you have a good product when someone comes along and tries to copy it.

A soft cotton liner worn in your bra, Pambra’s absorbs perspiration under and between the breasts. Pambra’s also adds comfort to that cute little under wire bra that isn’t always so comfortable.
So, toss out the powders, rags and mini pads so many have resorted to. It is our unique blend of fabric and cotton that absorbs moisture and keeps it away from the skin. Doctor tested and approved, Pambra’s virtually eliminates the threat of fungus, and prevents heat rash from developing.
Pambra’s have no pins, hooks, or tapes; the liners have been proven to stay in place with a properly fitted bra. (A properly fitted bra has no more than two fingers space to pull away from the body.)


Pambra’s are sold in packages of three, one color per package, and are machine washable and dryer safe.

MY REVIEW.
I WAS HAPPY TO BE ABLE TO REVIEW A PAMBRA. I KNOW AS A PLUS SIZED WOMAN I ALWAYS SWEAT ALOT AROUND MY BRA AND BETWEEN MY BREAST'S.I TRIED A PAMBRA OUT THE DAY I GOT THEM. THEY REALLY DO WORK GREAT. I HAVENT BEEN ALL SWEATY AROUND MY BRA AND MY BREAST'S ANYMORE. THANKS TO PAMBRA.I GAVE MY FRIEND WHO IS REALLY SKINNY ONE TO TRY OUT AND SHE SAID IT WORKS GREAT FOR HER WHEN SHE GOES EXERCISING.SHE LIKES HER PAMBRA TOO.YOU CAN GET YOUR SELF A PAMBRA RIGHT HERE.YOU'LL BE HAPPY YOU DID.I LOVE THAT THEY COME WITH INSTRUCTIONS TOO. 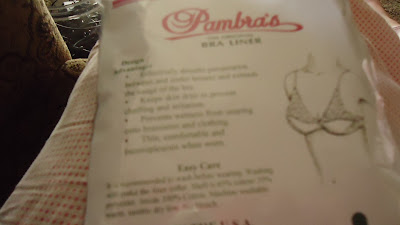 DISCLAIMER:I DID RECIEVE A PACKAGE OF PAMBRA'S TO TRY OUT.I WASNT CONPENSATED IN ANYWAY FOR THIS REVIEW. THESE ARE ALL MY OWN OPINIONS.
Posted by Unknown at 6:53 AM