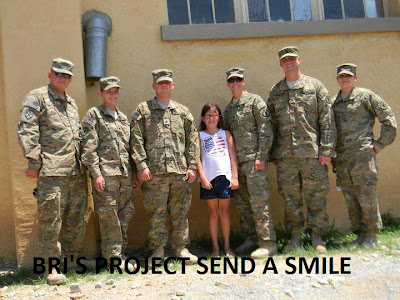 I CAME ACROSS BRI'S FACEBOOK PAFE AND WAS SO AMAZED AT HOW OLD SHE IS AND WHAT SHE IS DOING. THAT IS WHY I EMAILED AND ASKED HER MOM IF SHE COULD DO A GUEST POST ON MY BLOG. BRI IS ONE OF TEH MOST AWESOME 10 YEAR OLDS I HAVE CAME ACROSS.WELL ENOUGH OF ME TALKING NOW ONTO BRI'S MESSAGE AND THOUGHTS.
Bri started Bri's Project Send a Smile when her cousin was deployed in August 2010. Her dad told her how lonely it gets when you are deployed and how much it means to people who are deployed to get mail. So she decided she would "send smiles" to her cousin in the form of weekly letters & occasional care packages. A friend of his who was also deployed asked her to write him too, so she was at two. Then she decided maybe more soldiers needed smiles and she randomly picked one boy and one girl from the list of people in his company who said they would enjoy having a pen-pal. At Christmas she sent everyone in the company Christmas cards and two girls wrote back. So she was at six. She wrote this group of six for their entire deployment sending weekly letters and monthly care packages. The soldiers rapidly became extended members of the family and she made sure to send them their favorite snacks in their boxes so that they knew someone was thinking of them. When the original six came home they surprised Bri with a trip to Ft. Bliss to meet them all at their Coming Home Ceremony. It was a trip of a lifetime.

We offered to end Bri's Project Send a Smile when the six were home but she said she wanted to continue it but not with so many soldiers this time. So we put the word out and she quickly had a soldier deploying who wanted to be adopted. Then a friend of her cousin's was getting ready to deploy and she offered to adopt him too. When she makes a commitment to a soldier to adopt him/her it's for the entire deployment. She promises to send monthly care packages and at least two letters a month.

Right now her soldiers are stationed in Afghanistan and Kuwait. The soldier in Afghansistan doesn't have access to a PX so anything he gets has to come in the form of care packages. His company is also taking part in a goodwill mission giving toys to the local children. The soldier in Kuwait is part of a FET (Female Engagement Team) of 17 women that interact with the local women and children helping them get services they need.

Ideas for care packages:
any type of chips and prepackaged snacks, cookies, chex mix, gum
flavored drink mixes that can be added to water bottles
hot cocoa, instant coffee, ect..
condiments like hot sauce, ketchup, ect from fast food places
sunscreen
baby wipes
Mike loves things like ramen, chunky soups, monster energy drinks ( he doesn't have a microwave but can heat up soup on a camp stove)
LaMar loves peanut butter, flavored coffee drinks, *alergic to coconut*
Bri is trying to get things for Mike to send the kids like small toys, crayons, coloring books, puzzles that sort of thing
She's also trying to do things like girly boxes with things like microwaveable popcorn & movies for the girls, stuff for facials, manicures, ect..
Movies are a HUGE thing as books. Those can be shared & passed around.she currently has 2 soldiers.. but has unofficially adopted the FET girls which is another 16 that she tries to send stuff to when she can.
if you would like to make any donations at all email leigh bri's mom at leighstutesman@yahoo.com
bri's mom has put alot into help bri make thsi possable too.please be sure to head over to bri's facebook page and leave a post saying hi and thanks to bri and her mom as well.

below are a few pictures of bri's care packages and items she sends to her soldiers. 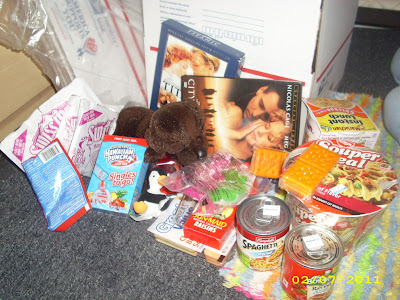 here is a picture of one of the care packages bri sent over seas to a soldier. 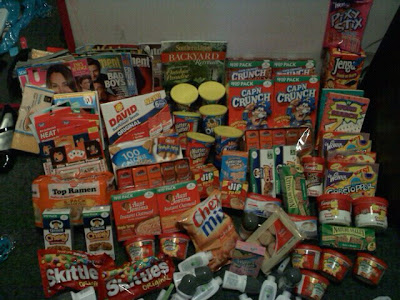 here is a picture of items bri send over to teh soldiers. bri really is an awesome young lady. dont you think so too?
Posted by Unknown at 6:06 PM

Thanks for much for sharing Bri's story with your followers!! Bri loves sending smiles to deployed soldiers. She has a heart of gold and loves her soldiers like family members.