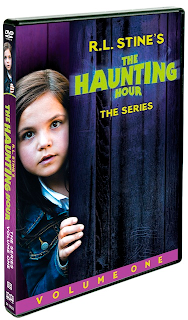 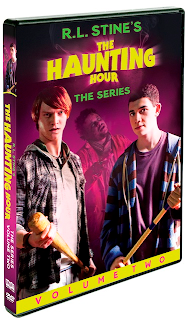 “R.L. Stine’s The Haunting Hour: The Series” currently airs on Saturdays at 5 and 5:30 p.m. (ET) on The Hub TV Network, a television destination for kids and their families. The popular children’s anthology series recently received seven 2012 Daytime Emmy® Award nominations from the National Academy of Television Arts & Sciences.
Families everywhere will be won over with the charming chiller, as the series is the winner of the Parents’ Choice Award in Television programming for April 2012, proving that moms and dads everywhere are giving their seal of approval for Stine’s latest work. People everywhere love to be frightened, and this series brings the opportunity for families to come together to enjoy the bumps in the night that only R.L. Stine can deliver!
“R.L. Stine's The Haunting: The Series” is produced for The Hub TV Network by The Hatchery, LLC., in association with Front Street Productions. The series is executive produced by Dan Angel, Billy Brown, Harvey Kahn and Kim Arnott.
Setting the gold standard for contemporary horror for kids, world-renowned children’s author R.L. Stine has penned hundreds of horror stories and sold over 400 million books worldwide. Stine is the recipient of a Children’s Choice Award, and holds the Guinness Book of World records for #1 best-selling children’s book author for three years running.

our review.
i watched these dvd's with brea my 5 year old daughter. she really enjoyed thses dvd's as much as i did. brea alwasy wants to watch scary movies like her dad. so i knew these would be great for her to watch. she is only 5 and she loved them too. she is always asking me to watch the r.l. stine dvd's now. so i tell her only when me'ana is napping. i think your family will like these dvd's too. my daughter really enjoyed them. 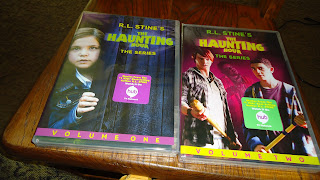 picture of the dvd's i got to review.


disclaimer: i wasnt compensated in any way for this review. however i was given a sample to review. these are all my own opinions.

Email ThisBlogThis!Share to TwitterShare to FacebookShare to Pinterest
Labels: R.L. STINE¹S THE HAUNTING HOUR: THE SERIES VOLUME 1 and VOLUME 2 - on DVD 9/4/12 review