FIRST OF ALL I WOULD LIKE TO THANK AARON AT NATURES HAND FOR THIS AMAZING GRANOLA.
ABOUT NATURES HAND
Over 40 years ago, two Bavarian immigrants who resided in Minnesota decided they wanted to begin blending and baking their own unique mix of grains and nuts. This recipe would come straight from Northern Europe and was a recipe that had been used and shared with many people back in the old country. The founders never had any intention of marketing and selling their product initially. They baked it simply because they loved the taste of the granola they were making.
After a few years, friends and family began inquiring about the recipe. At this point, the founders began engaging in the idea of selling their granola commercially since it was developing such a cult-like following.
For the next three decades, the founders baked and sold their granola, slowly expanding their reach over much of southern Minnesota and western Wisconsin. They originally formed a company called Nature’s Harvest, but then changed the name to Nature’s Hand a few years later. The company had a loyal customer base that used the product as a cereal, a topping, and a baking ingredient with other delicious recipes.
OUR REVIEW.
WHEN THE PACKAGE CAME IN I OPENED IT AND WAS SO AMAZED AT THE LARGE BAGS OF GRANOLA AND THE BEAUTIFUL GLASS BOWL WITH A LID.LATER THAT NIGHT AFTER DINNER I MADE MY GIRLS A BOWL OF VANILLA YOGURT AND TOPPED IT WITH A LITTLE OF THE GRANOLA.ME'ANA CHOSE THE MAPLE PECAN AND BREA CHOSE THE APPLE CINNAMON GRANOLA.ME'ANA TASTED HER FIRST AND SAID I LOVE IT MOMMY.THEN BREA TOOK A SMALL BITE AND SAID YUMMY.THEN MY GIRLS WERE VERY QUIET FOR A LITTLE WHILE. THEY WERE BUSY ENJOYING THERE YOGURT AND AMAZING GRANOLA.ME'ANA CAME TO ME INSISTING SHE SAVED ME A BITE AND WANTED ME TO TRY IT. SO I DID.LET ME TELL YOU THIS IS THE BEST GRANOLA I HAVE TASTED YET.I HAD TO GO MAKE MYSELF SOME.I LOVE THIS GRANOLA. MY FAVORITE IS THE MAPLE PECAN.OH AND BY THE WAY I TOOK CLAIM TO THE GLASS BOWL.LOL I THINK ITS SUCH AN AWESOME BOWL.YOU CAN FIND THIS AWESOME GRANOLA ON THERE WEBSITE AND ALSO ON FACEBOOK TOO. 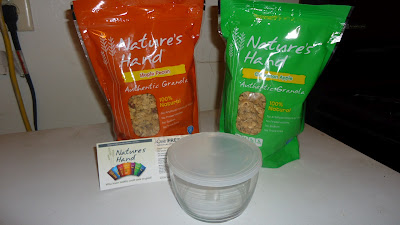 THE NATURES HAND PRODUCTS I REVIEVED. 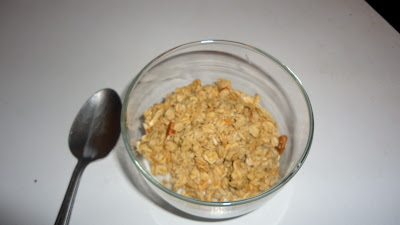 THE BOWL I JUST HAD TO GO MAKE MYSELF. 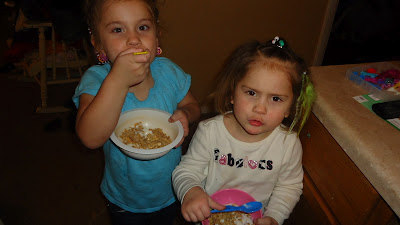 DISCLAIMER:I WASN'T CONPENSATED FOR THIS REVIEW.THOUGH I DID  RECIEVED A SAMPLE OF THIS PRODUCT.THESE ARE ALL MY OWN OPINIONS
Posted by Unknown at 1:37 PM

New follower from MBC -- check us out and follow us back at www.highheelsandhotdeals.com

looks and sounds good! we had granola and yogurt and strawberries for our dessert tonight!
I am your newest follower..pls follow back if you can.