Behind the (Prenatal) Music!

If you ask Curtis Williams (creator and co-founder), the inspiration for bellybuds happened during the 2nd trimester of his wife’s pregnancy with their first child.
“We had read that playing prenatal music to the womb was beneficial – so right around the fifth month, my wife began placing her ipod earbuds on her belly and playing classical music for our daughter. The only problem was that in order to do that, she had to lie on her back and couldn’t move – which is a lot to ask of my multi-tasking wife. It seemed like there was a possibility for something more convenient.”
After searching the internet and finding nothing designed specifically for the playing of prenatal music or other sounds from a digital music player to a developing baby in the womb, Curtis decided to pursue the idea. he contacted a friend who was a product designer to help design and engineer the piece. Initially, he asked him to help make a one of a kind product for his wife, but as they worked on the idea and talked about it with others, Curtis realized that the concept might have a broader appeal. That’s when the endeavor began in earnest to create bellybuds.

“During the design process, we had many conversations with mothers about what they would like or not like in such a pregnancy product. That feedback was invaluable and it directly affected our design choices. In the end, we wanted it to be easy, we wanted it to be effective, we wanted it to look good and most importantly, we wanted it to be safe.”
Influences for the product design came not only from pregnant moms-to-be, but also from some rather unexpected places. The brainstorm for a music player that could possibly adhere to the belly, for instance, derived from an adhesive device Curtis had previously used to relieve sore muscles. Another “a-ha!” moment happened while using underwater speakers in the seal tank at the New York Aquarium – much of the same sound direction and design technology employed in that specific design could likewise be applied to bellybuds. A few tweaks and additions later – bellybuds were born!
Today, bellybuds are available for all parents-to-be and the creators couldn’t be more proud: “It’s been quite a journey.” says Curtis, “It has definitely been a bonding experience for our family and we’re very happy with the result. we hope that everyone will enjoy bellybuds as much as we have enjoyed creating them!”
Learn more about our products!
MY REVIEW.
I HAVE ALWAYS PLAYED MUSIC TO MY CHILD WHEN I AM PREGNANT. WITH MY FIRST DAUGHTER AND SECOND MY HUSBAND AND I WOULD PUT HIS SPEAKERS UP TO MY BELLY FOR OUR DAUGHTERS TO HEAR MUSIC. WHEN I CAME ACROSS TEH BELLY BUDS I KNEW I HAD TO TRY THEM. SO I CONTACTED THEM FOR A REVIEW. I HAVE BEEN USING THEM FOR A WHILE NOW. MY SON LOVES TO KICK WHEN I PLAY MUSIC. I CAN ALREADY TELL WHAT KINDS OF SONGS HE LIKES AND DONT. HE PUCHES ON ME REALLY HARD IF HE DONT LIKE A SONG AND WILL STOP AFTER I CHANGE IT. WHEN HE LIKES A SONG HE KICKS SOFTLY. I REALLY LOVE MY BELLY BUDS. NOW I CAN WALK AROUND AND DO EVERYTHING I NEED TO A ND LET MY BABY HEAR MUSIC STILL. I WILL DEFFINATLY KEEP USING MY BELLY BUDS THRU OUT THE REST OF MY PREGNANCY. THANKS SO MUCH FOR INVENTING BELLY BUDS. MAKE SURE TO HEAD OVER AND CHECK OUT BELLY BUDS. THERE SO AWESOME. 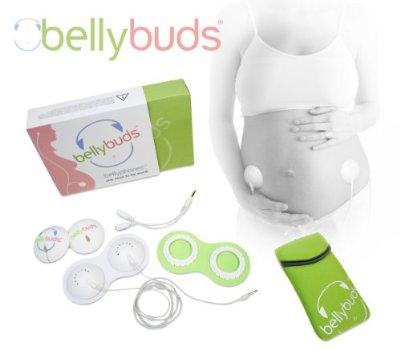 DISCLAIMER:I WAS GIVEN A SAMPLE PRODUCT TO TRY. I WASNT COMPENSATED IN ANY OTHER WAY FOR THSI REVIEW. THESE ARE ALL MY OWN OPINIONS.
Posted by Unknown at 12:13 PM