DR. SEUSS' THE LORAX Kids Workshop at The Home Depot on 8/4/12 and New Mini-Movie Bonus Clip 1 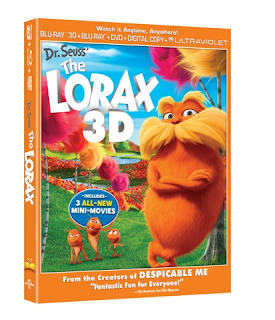 Wagon-Ho! Hitch up your wagons and head to THE HOME DEPOT this weekend with DR. SEUSS' THE LORAX!

At The Home Depot locations nationwide, the Kids Workshop will provide children with Lorax activity sheets, Lorax create-you-own mustache kits, and Lorax sticker sheets. Each store will also have one life-sized Lorax poster to affix to a wall so kids can have their picture taken with The Lorax that you can tweet to @The Lorax and @HomeDepot.

This month's activity is "Build a Cork Bulletin Board."
• Kids will learn to build their very own cork bulletin board while learning tool safety• Have fun, make friends and gain a sense of achievement and work ethic• You can paint and add embellishments to your project while at the workshop

ABOUT THE HOME DEPOT KIDS WORKSHOP
• FREE hands-on workshops designed for children ages 5 - 12 offered the 1st Saturday of every month at all The Home Depot stores between 9:00 a.m. – 12:00 p.m.• Workshops teach children do-it-yourself skills, tool safety and instill a sense of pride and accomplishment.• All kids get to keep their craft and receive a FREE Kids Workshop Apron, commemorative pin and certificate of achievement.

More information at:
http://www.homedepot.com/webapp/catalog/servlet/ContentView?pn=HT_WS_KidsWorkshops
Here is also a brand new sneak peek of the all-new mini movie "Wagon-Ho" where two Bar-ba-loots take The Once-ler’s wagon on a ride they won’t soon forget:

BRING HOME THE #1 ANIMATED FILM OF THE YEAR FROM THE CREATORS OF DESPICABLE ME AND THE IMAGINATION OF DR. SEUSS!

Plus Get Three Never-Before-Seen Mini Movies Available only on

Universal City, California, June 5, 2012 – The colorful and captivating world of Dr. Seuss bursts onto the screen as never before on August 7, 2012 in the hilarious and captivating adventure, Dr. Seuss’ The Lorax from Universal Studios Home Entertainment. Available on Blu-ray™ 3D Combo Pack and Blu-ray™ Combo Pack -- both featuring DVD, Digital Copy and UltraViolet™ so you can watch it anytime, anywhere -- Dr. Seuss’ The Lorax is non-stop family fun that includes three delightfully entertaining mini movies not shown in theaters,available only on the Blu-ray™ Combo Packs. The film will also be available on DVD and Digital Download. To view a trailer of the new mini movies, visit http://youtu.be/3DXU1348PHg


disclaimer:i wasnt compensated in any way for this post. however i did recieve a sample copy to review. these are all my own opinions.
Posted by Unknown at 8:44 PM