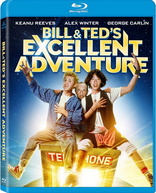 Keanu Reeves (The Matrix) and Alex Winter (The Lost Boys) deliver "spirited performances" (The Hollywood Reporter) in the original righteous comedy about the two ditzy dudes from San Dimas, California. Also starring George Carlin, this hysterically funny historical comedy is a "snappily directed" (Time), "bouncy good time" (The Boston Globe) and a party that goes on and on! Bill (Winter) and Ted (Reeves) have spent so much time forming their rock band, The Wyld Stallyns, that they're flunking history. Whoa, duuuude! And when Ted's dad threatens to send him away to military school, Bill and Ted realize it could mean the most heinous end of The Stallyns! Luckily, a guardian angel from the future, Rufus (Carlin), has come to them with a most bodacious solution: a time-traversing phone booth to take them into the past to learn about the world from some of history's most influential personalities.


MY REVIEW.
i actually wanted to review this movie because i knew chris would love it. when i told him the dvd was coming he kept asking me everyday if it was here yet. he is just as bad as my kids. lol . i guess thats where they get it from. chris had seen this movie so many time. he loves it alot. he use to watch it when he was a teen. this is a good move. its si funny. chris laughs the whole way thru the movie. you really should head to the store and pick up a copy.

disclaimer: i was given a sample copy to review. i wasnt compensated in any other way for this review. these are all my own opinions.