Scott Bachrach is an American Businessman and entrepreneur in the fields of manufacturing, product development, sales and marketing. He was named one of the Forty under Forty Young Licensing Leaders of Tomorrow by License! Magazine, and has generated over $1 billion in retail sales throughout his career.
Bachrach founded the Fun-4-All Corporation in 1995, where he was Owner and CEO. From 1995 to 2004, he grew Fun-4-All from one product to 300, generating nearly $40 million in annual revenue.
Fun-4-All launched licensed toy products for several motion pictures and other brands, including South Park, KISS, The Osbournes, Kellogg's, Pet.com and Fisher Price. It also won notable industry awards such as the Licensing Industry "Licensee of the Year" award, and Spencer Gifts, "Vendor of the Year" and "Licensed Product of theYear."
Bachrach founded Think Tank Toys in 2006, a New York-based company that manufactured and marketed toys and other novelties, in 2008 Think Tank Toys was accquired by Wow Wee USA , a designer of high-tech entertainment products. The new division was named Think Wow Toys, and has since launched products for brands such as Mrs. Fields , Jamba Juice, Hershey's, Chuck E. Cheese's, and The Disney Company.

Dan Lesnick began his career in retail in 1974 working for Lionel Leisure retailer. During his ten year tenure he went from Buyer to Senior Buyer of bicycles, pool and gyms.
In the early 1980’s, Dan became the Merchandise Manager at Spencer Gifts.
In the 1990’s Dan formed Marketing Group Inc, which developed, marketed and manufactured children’s products. During that same time he teamed with the Hong Kong based Winway Corporation Ltd. to be their exclusive agent for the US market.
YerfDog Fun Karts
1996 - 1998 - Partner. Sold Flexible Fly in 1998.
Janex/Div. MJL Marketing
1982 - 1983 - Owner. Janex manufactured licensed tooth brushes, flash lights, and gum ball banks as well as doll bedding. In 1993 Janex was sold to a public company.
Schipiro Schiffman
1980 - 1982 - Worked as a salesman for this company covering the New York and Mid-Atlantic areas. Handled accounts such as Toys "R" Us, Lionel Leisure, McCrory's, Woolworth's, etc.
Lionel Leisure, Inc
1971 - 1980 - Assumed the position of buyer of bikes, pools and gyms after Toy Town USA was purchased by this company.
Toy Town USA
Started in the toy business in 1971-1979 working for Howard Moore in Baltimore, MD in a multi diversified position. 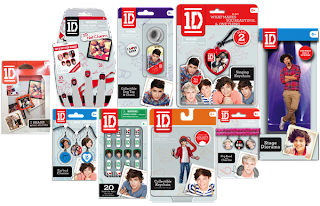 Everyone has heard the songs, everyone knows the band members, now fans everywhere will be clamoring to get their hands on these hot 1D products!
The members of 1D made history in the US by being the first British group ever to debut at the #1 spot in the Billboard 200 charts. The sales for their smash hit "What Makes You Beautiful" have achieved platinum status, and are only rising. 1D announced a US tour for the summer of 2013, with the tour selling out in under an hour. 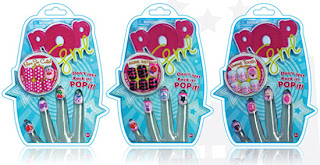 Pop Grrl products are the NEXT generation of collectable accessories for your nails, toes, hair and favorite music devices. The Pop Grrl brand is about hip and trendy fashion forward must haves for girls’ everyday self expression.

Original Pop Grrl Nail Charms feature the newest innovation of stick-on nails with poppin’ designs, creating a unique 3D look! Girls will be setting the trend at home and school with hottest new fashion accessory. Pop Grrl Nail Charms have a variety of designs, including top licenses that girls love. The new Pop Grrl product lines from The Wish Factory are perfect for any fashonista!

Music meets fashion like never before with the Pop Grrl i-Poppin’ music accessories from The Wish Factory. Listen to music anytime and anywhere, but never lose that sense of style. Rock out with i-Poppin’ Clip-Ons, Bracelets, i-Shares and Necklaces, all featuring different charm designs to fit every girl’s style.

Locker Rockers are the must have back to school accessories, with super cool collections to fit the style of every girl. The brand is all about self expression and now girls can express who they are and their personal style by decorating their lockers to fit their personality. With four different themes “Glam Rock,” “Beach Crush,” “Bohemian Spirit,” and “Scribbles Beat” there is a collection that screams every girl’s style!

my review.
My daughter me'ana loves one direction alot and my daughter brea loves press on nails and girly stuff alot. so this is one of my favorite reviews. both my daughters happy with one box of items. my husband has a friend that looks like one of the one direction guys. so me'ana runs around telling him hahaha i got toys that look like you. lol its too cute. my daughter has enjoyed playing with her new one directions toys alot. brea loves the nails and head phones she got and her locker stuff as well.she cant wait till she goes to 2nd grade to be able to have a locker to decorate. you should head over and check out the wish factory and all of its awesome products.


disclaimer: i was given a sample product to try out. i wasnt compensated in any other way for thsi review. these are all my own opinions.
Posted by Unknown at 6:11 PM

Email ThisBlogThis!Share to TwitterShare to FacebookShare to Pinterest
Labels: the wish factory review