Instead Softcup fits your busy lifestyle—you can wear it for up to 12 hours during any activity. Softcup is comfortable; you can't even feel it once it's inserted.

Just try it on your next period, and experience the convenience and freedom that thousands of women have with Softcup.

Softcup is a flexible cup that is worn internally, around your cervix. It collects, rather than absorbs menstrual flow. It's hypo-allergenic, latex-free and completely safe when used as directed.


What is reusable Softcup?


Why should you try it?

Softcup is great for busy women, or women who just don't want to have to think about changing a pad or a tampon every few hours. Athletes rave about how the Softcup carries them through a long race. Travelers don't leave home without it.

You don't have to change your routine just because you're on your period—Softcup can be worn during all types of physical activity. Because it's worn internally, and there are no strings, you can wear anything without worrying about revealing any trace of your period protection.

With Softcup, you and your partner can enjoy less messy intercourse during your period, and neither of you will even feel it's there.

Safety is important when it comes to your reproductive health. Instead Softcup has been cleared for the market by the FDA and has been on the market for more than 10 years. Both the reusable and disposable Softcup are made entirely of hypoallergenic, non-toxic, latex-free, non-irritating material.
In more than 10 years and 120 million Softcups sold, Softcup has never had a reported incidence of Toxic Shock Syndrome (TSS). TSS is believed to be caused by the toxin-producing strains of the bacterium Staphylococcus Aureus. Population studies suggest that the risk of TSS is related to tampon absorbency. The higher the tampon absorbency, the higher the risk of contracting TSS. Unlike tampons, Softcup is non-absorbent, and does not change the bacteria levels naturally present in the body. 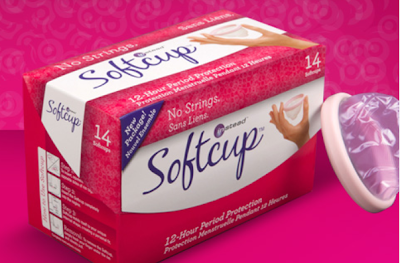 my review.
i had the advantage to review softcup with my mommy group. i shared my samples with my group. they all took there samples home and then met back up a month later for me to get there opinions. my own personal opinion is that i dont like using the softcup. its way too messy. i spilled blood all the times i tried to use them. yes they did last as long as they are said to last. that is the only thing i like baout softcup. my mommy friends also stated some of the same things. way too messy. softcup maybe for you. head over and check out softcup. http://softcup.com/
disclaimer: i did recieve samples thru moms meet to try out. i wasnt compensated in any other way for this review. these are all my own opinions.
Posted by Unknown at 6:13 AM